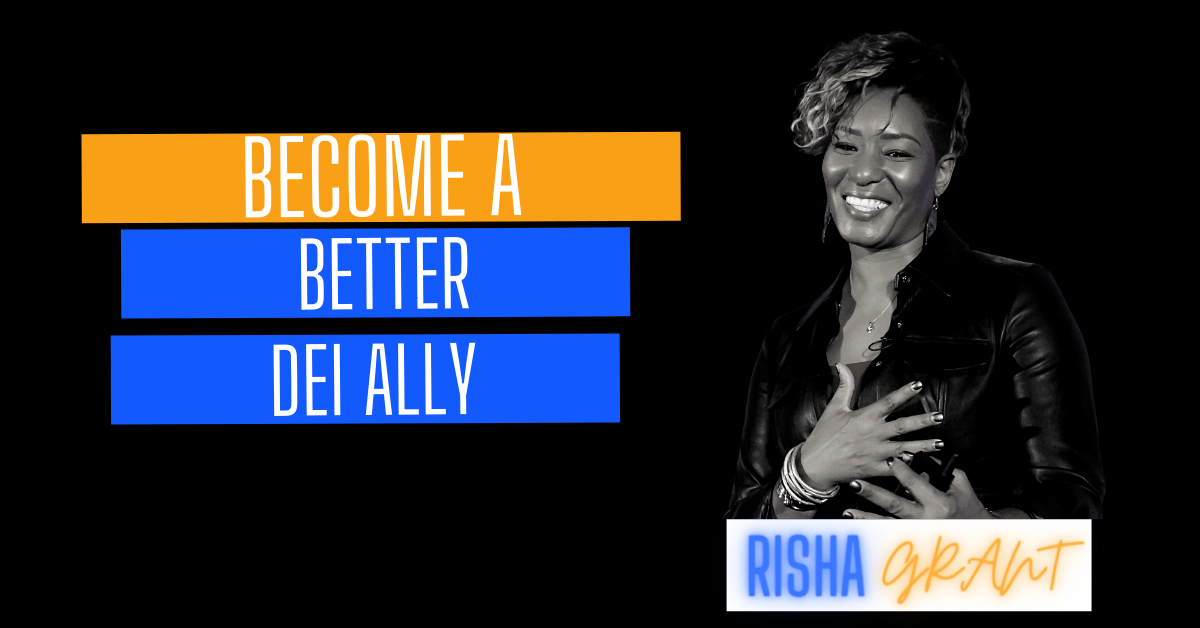 Challenges of being a DEI Ally

I get asked, “How can I become an ally?” in nearly all my DEI keynote speeches. It’s made me realize that allyship is a tricky topic for a lot of my clients. There are many reasons for this, but I’ve narrowed it down to two of the most prominent. The first reason allyship is challenging is that people don’t know where to start. They want to jump in and join the fight for diversity, equity, and inclusion but have no idea what skills, tactics, or armor is required.

The second reason is it’s just plain scary. Some of you reading this are wondering what to do. The others know what to do because you listen to NPR, keep up with social justice on social media, but you’re terrified of speaking up. You may have thoughts like, “What if I say something wrong or don’t have enough evidence to back up my statements?”

This post will teach you easy ways to become a better ally and get over your fear of joining the fight against injustice. But first, let’s discuss what it means to be an ally.

What does it mean to be an ally?

Well, that answer is simple. An ally in the DEI space is anyone who supports, uplifts, or stands up for another person who belongs to a marginalized group. In even simpler terms, it means that you consider your colleagues, neighbors, classmates, and church members as friends. So, when you see someone or something bigger, stronger, and more threatening bullying your friend, you stand up for them.

In the case of DEI, the bully we’re fighting is oppression. Therefore, when Susan from HR only smiles at white employees, and you notice, your fight is not with Susan; it’s with oppression. It means that when Uncle Jamal says something homophobic or transphobic, you’re not fighting Uncle Jamal; you’re fighting oppression. I won’t lie to you; being an ally doesn’t come without its challenges. When you call out Susan or Uncle Jamal, they may take it as a personal attack because it will feel personal to them. But YOU need to know, even if they don’t know, that you aren’t fighting a person; you’re fighting something much bigger.

Now how do you fight the good fight and become an ally?

It is going to take a time investment on your part. How you do this is entirely up to you. If you are a person who would rather be dead than read a book or pick up a newspaper, then don’t do it! Listen to a podcast! If you’re more of a visual learner, then try watching a documentary. We have an entire series on Risha Talks that can help teach you about systemic racism. Do documentaries bore you to tears? Then make sure your learning is mixed with entertainment by watching shows like Blackish or Pose.

Do you want to have a dialogue about what you’re learning, but none of the other white ladies at church are watching Blackish? There is a thing called social media that will allow you to engage in dialogue or observe what communities are saying about what a particular episode means to them and their culture. My point here is that there are so many different ways to learn about those different from you, and they don’t all have to be tedious or intimidating. Find the method that works for you. Don’t worry if you don’t even know where to start looking for this content. You can DOWNLOAD OUR MEDIA RESOURCE LIST FOR FREE.

Step # 2 Listen with curiosity and without judgment.

Being a good listener and learner takes a certain level of humility. The bottom line is you don’t know what you don’t know. Some people equate humility with inferiority, but that’s not the case. Humility doesn’t mean inferior it means freedom. Do you know how freeing it feels not to have all the answers? It frees you from the expectation of knowing it all. When you acknowledge that you don’t know everything, guess what? You become teachable, which takes the pressure off of you.

Now, I am not endorsing that you find the next diverse person you see, tell them you don’t know anything about DEI and ask them to teach you everything. But, I am saying when the student is ready, the teacher will appear. I can see you rolling your eyes thinking, Sure, Risha, a magical DEI teacher is going to appear to teach me how to be a better ally.

I am not saying it’s going to be magical. It will probably be uncomfortable. For example, it may be that your co-worker shares a pain point with you, and suddenly you become aware that it hurts a black woman’s feelings when someone comments on how articulate she is. Your best bet is to listen so that you can learn more about her feelings. You can learn about her pleasure and pain points and deepen your understanding of her experiences and, therefore, your relationship with her.

Tip: Don’t have any diverse people proximate to you? Get on Twitter or TikTok. So many people share their raw experiences online. See if you can listen to their experiences without judgment.

When you’re at family gatherings, hanging with your friends, or in a bible group, talk about what you are learning. Ask where the fight against racism, sexism, and yes, even homophobia fit in with your faith. Make sure you challenge Uncle Bob when he says the black lives matter protestors are thugs. You don’t have to be armed with all the data and stats, though many people would have you believe that. Put the pressure back on Uncle Bob, say, “What do you mean by that, Uncle Bob? What does the word thug mean to you? If the police killed me and no one would help you, what would you do in your desperation for justice?

When Uncle Bob says, “The black lives matter protestors are a bunch of rioters and looters?” Ask if he’s looked into the organization, its mission, and what it stands for? Has he talked to any black people? Does he have any black friends? Challenge your friends when they say gay marriage is wrong because of the bible. Ask if they believe the great thing about America is that people have the freedom to practice whatever beliefs they want? If yes, then it isn’t also fair to say we can’t make people believe being gay is wrong based on our personal religious beliefs. You don’t have to show a person how much you know. You can ask enough questions to conclude that they don’t know as much as they think they do.

Those are three easy ways you can be an ally. Allyship is about changing oppressive systems, and yes, that’s a huge and daunting task. But remember that those systems were created and carried on by people. So as we change ourselves and challenge others to change themselves, the new systems we develop will seek ways to connect instead of dividing us.